Choosing a topic for a book

October 14, 2017
Hi, All!
Other than waiting for the galleys of Plague in Paradise: The Black Death in Los Angeles, 1924 to be sent to me for final review, I'm now finished with that book.  It will be published in 2018, and I can't wait because the topic is so timely right now.  It seems like every day another report appears in the national newspapers about the Black Plague outbreak happening right now in Madagascar, where over fifty have been killed by this dreaded disease and over five hundred are still being held in its grip.  And it isn't just Madagascar that has been in the news lately because of plague; an outbreak happened in our American west just a couple months back.  Yes, this scourge of the Middle Ages is still with us to this day, and more and more outbreaks are being reported around the globe. For as far as medical science has come in its knowledge of how to fight the plague, there is still so much to learn about how these outbreaks happen and what to do about them.  Plague in Paradise tells the story of the last major outbreak of the Black Plague in the United States, which happened in 1924.  In this book, readers will see how past history is influencing the present, especially through the trials and tribulations of the outbreaks happening right now.
With that book finished, it is time to move to the next project.  This is both an exciting and, at times, frustrating time for authors.  It is an exciting time for me because I know whatever topic I choose, I'm going to spend the next year of my life researching it -- and then six more months writing it.  I absolutely LOVE doing the research -- the digging through archives and records centers, the travel to interview people associated with the topic, reading everything I can get my hands related to the story -- and finally starting on a storyboard for the book.  On the other hand, because there are so many topics from which to choose when deciding on a project, the frustrating part is narrowing down the choices to just one that I want to invest my time in during the research and writing.  Put more simply, I usually end up with three or four topics I'm interested in, and whittling these down to the one I'll actually work on is so tough for me.  I'd like to do them all!  Right now, for my next book, which will also be literary nonfiction, I've narrowed my choices down to three.  One would be a story about another group of heroes who served during World War II.  The other two would be about "pioneers" who helped advance medicine and quality of life in our country.  I'm going to do a little more research into the three before making my final decision.  I have to decide which story I'd most like to write, but it isn't just that easy. I also need to check to see what material is out there to draw from when doing my background research.  In other words, not only do I have to chose what I'd like to do -- I also have to make sure I can find enough information to do justice to the story and stick to the code of literary nonfiction.  So, stay tuned.  I'll be making my decision soon!  In the meantime, I wish all of you happy reading!
JSC
P.S. The attached photo is me with John Pertzborn of the St. Louis Fox News affiliate when I was on to talk about the documentary film I put together last year, "The Story of Shelley v. Kraemer," which is still showing at the Missouri History Museum through April 15, 2017. John Pertzborn is one of the best news anchors I've ever worked -- and a wonderful human being 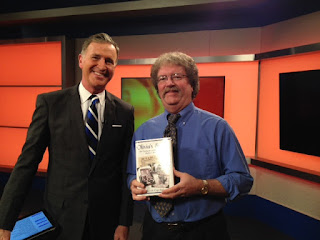