Up next: After Jackie! 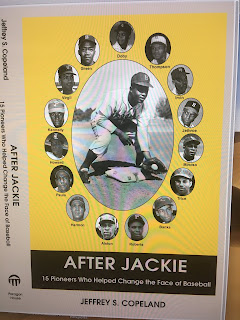 I hope this note finds all of you well and riding out these very odd and unsettling times we are in.  As most of you know, my "day job" is being a university professor. Here at our school we've had all sorts of ups and downs caused by the pandemic.  We're also still trying to adjust to the "new normal," which involves classes and people being together in all sorts of combinations: in-person, through Zoom, Skype, BlueJeans, FaceTime - and even old-fashioned phone calls.  The technology side of this has been a real challenge for many.  For my 8:00 a.m. class, which was being hosted through Zoom one morning during the jaws of the pandemic, my students were Zooming in from their dorm rooms or apartments close to campus. Imagine my surprise when two of them, a young man and a young woman, weren't fully clothed.  I said something immediately, and both were horrified -- because they thought they could see me but we couldn't see them!  Ah, the innocence of youth....

I feel lucky that members of my extended family who have had Covid did not have severe cases.  I can't say the same about my students, some of whom became seriously ill -- and are still dealing with the effects of the virus today. I wish them all the best as they continue their medical challenges. Like so many others, I'm longing for some return to normalcy, but who knows when that will be?  In the meantime, I just hope people will be kind, caring, and understanding to all.

While "cooped up" this past year, I was able to finish the book I had started right before the pandemic hit. I'll attach the "mock-up" of the cover to this message so you can see a general idea of what it will look like. This mock-up shows Jackie Robinson in the middle, and the "other fifteen" men in small circles around Jackie's image.  Also, the "book blurbs" (testimonials) from other writers and sports personalities that will go on the cover aren't on this mock-up. Finally, the full title of the book is: After Jackie: Fifteen Pioneers Who Changed the Face of Baseball.  The idea for the book actually came about one night, pre-pandemic, when I was eating supper in a restaurant that had a baseball game on the television in the corner of the room.  Between bites, I saw the right fielder make an error, and the announcer said, "That looked like the second coming of Carlos Paula." Nobody else in the room got the obscure reference, but I did.  The announcer's words caused me to laugh and almost choke to death on my food.   The player the announcer referred to, Carlos Paula, played for the Washington Senators in the mid-1950's.  Carlos was a tremendous hitter who could have had a long and glorious career -- except for one thing: He never could quite get the hang of catching the dang ball.  As a result, he made quite a few errors, much to the dismay of his manager, his teammates, and even the fans.  After hearing the announcer bring up Mr. Paula's name, something also dawned on me: Carlos was the first person of color to play for the Washington Senators of the American League.  That got me to thinking about something.  Nearly everyone, and not just baseball fans, has at least some knowledge of Jackie Robinson and his legacy.  However, Jackie was a pioneer on one of just 16 teams in Major League Baseball when he took the field for the Brooklyn Dodgers in 1947.  So, I immediately started wondering who the "other fifteen" were who helped break down the color barrier for the other teams.  In a nutshell, that's how the idea for this book came to me.  In doing the research, a great deal of which was done at the National Baseball Hall of Fame in Cooperstown, New York, I discovered the "other fifteen" went through much of what Jackie went through, but each also had a special story to tell about his journey into baseball.  In the book, a chapter is devoted to each of the "other fifteen" men, and their stories are incredible, which made the book a labor of love to write.  After Jackie will be released soon in electronic form, and a paperback version will then follow.  I'll let everyone know when it is available.  I can't wait - I loved writing this book!