February 27, 2017
Hi, All!
The premiere of the documentary film "The Story of Shelley v. Kraemer" went wonderfully!  The premier took place in the theater in the Missouri History Museum in St. Louis, Missouri (in Forest Park). The publicity for the event had been great (NBC, FOX, newspaper articles), so the theater was absolutely packed.  Before the event started, we had a reception for family and those who helped with the film, and that was a great time for many of them to meet each other for the first time!  Then, after the reception, everyone moved to the theater, where the general public had already started to gather. By the time everyone was seated, more chairs had to be brought in.
There were several speakers before we moved to the viewing of the film, and some of these were Gwen Moore from the Missouri History Museum; Art Holliday from KSDK Channel 5, and Charles Bryson (representing the Mayor's office) of the St. Louis Civil Rights Enforcement Agency.  All were wonderful speakers and delivered powerful messages.  After our speakers, I then gave some "background and context" for the film, including some "little known facts" about the "Shelley v. Kraemer" U.S. Supreme Court ruling.  We then watched the film, and after it was over and the credits rolled across the screen, those in the crowd started standing - 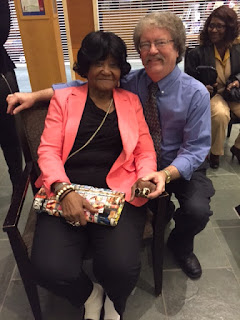 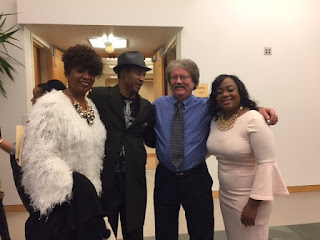 until a standing ovation filled the room.  That was a nice way of thanking all of those who stood bravely in the fight for rights and justice for all in the Shelley v. Kraemer case!  As soon as all were seated, members of the Shelley family and the Olivia Merriweather Perkins family came to the stage.  Previously recorded film clips of them talking about what their relatives went through were shown, and each in turn gave more information about the case.  All of the speakers were, in a word, WONDERFUL!
For those who could not attend the premiere, not to worry -- the documentary film will be the centerpiece of the new exhibit at the Missouri History Museum that will open officially on March 11, 2017 -- and will run for a whole year there!  The exhibit is called "St. Louis #1 in Civil Rights," and the exhibit will be there for the whole year as well.  If you get a chance, I encourage you to see the exhibit; it is both educational and entertaining -- and appropriate for all ages.
I'll attach to this note a couple of pictures from the evening.  The first is me with Chatlee Williams, the last surviving child of J.D. and Ethel Shelley (she did a wonderful job in the film!).  The second is me with several members of the Shelley family (from left to right, Deb Davis, Donald Beckham, me, and Monica Beckham).  All of them are some of the best and nicest people I've every known.
One final note: I want to give a special "Thanks!" to Douglas Hartley, who did such outstanding photography (both still shots and film footage) for the documentary film.  Douglas Hartley is an incredibly superb photographer, and the film would not have been such a success without his great work.
Again, if you are in the St. Louis area after March 11, you might want to stop in the Missouri History Museum to see the film and exhibit.
Enjoy!
JSC
Posted by You wont believe this, but... at 1:33 PM No comments:

February 15, 2017
Hi, All!
This weekend is the premier of the documentary film I put together titled "The Story of 'Shelley v. Kraemer'."  The premier will be held this Saturday at 7:00 p.m. at the Missouri History Museum in St. Louis, Missouri -- because the major events described in the film took place right there in St. Louis just a few miles from where the museum stands!  Also, the good folks at the Missouri History Museum asked for the premier to be at the museum because the film will be shown for a period of one year in their upcoming exhibit "Civil Rights St. Louis."
The background story related to the "Shelley v. Kraemer" U.S. Supreme Court decision was the backdrop for my book Olivia's Story: The Conspiracy of Heroes Behind 'Shelley v. Kraemer.'  This ruling, perhaps more than any other modern ruling, helped change the face and color of America.  Up until 1948 (when the Supreme Court ruling happened), people could be denied where they wanted to purchase a home because of issues such as race, color, creed, and national origin.  In St. Louis, a group of five individuals, called "The Conspiracy of Heroes," got together at that time, and through a carefully crafted ruse as good as anything one could find in a mystery movie, worked together to end the horrible practice of "restrictive real estate covenants."  The documentary film shows how these "conspirators" worked together to help all of this come about.
I'm going to post here a link to a story that was just done by Art Holliday, from KSDK Channel 5 in St. Louis, for his one of his projects related to Black History Month.  Mr. Holliday is one of St. Louis' true treasures; he truly *is* the voice of the people in that city.  He was also a pleasure to work with in the interview process.  Here is the link -- and a picture of Art and me standing in the Channel 5 studio during the intereview:
If you are in the St. Louis area this Saturday night, please consider attending the premier of the film, which will be at 7:00 p.m. at the Missouri History Museum in Forest Park.  The event is free and open to the public.  Note: If you are unable to attend this Saturday night, the "Civil Rights Exhibit" that the film is part of will officially open on March 11, 2017 -- and will run at the museum for a period of one year. So, you will have the whole year to see the film.
More soon.  Happy reading!
JSC 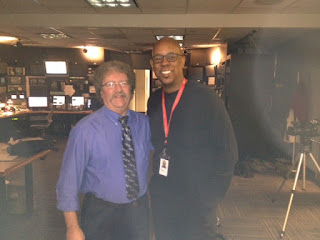