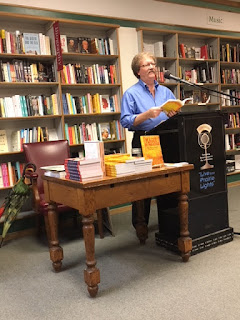 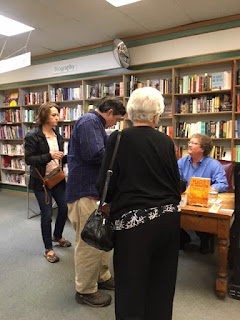 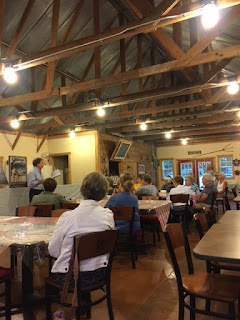 September 26, 2018
Hi, Everyone!
Plague in Paradise was "officially" released on September 1, so the past few weeks have been wild -- in a good way! The "book launch" period for a book is typically the first two or three months after copies are made available for purchase, and there is usually a flurry of activity during this time as the book is being introduced and promoted.  For example, I've already done book readings and events at bookstores, popular restaurants and gathering places for those who love books, and even did a live radio program about the book that was streamed over the Armed Services Radio Network.  I was particularly proud of this last event as it gave those who are serving our country a program to listen to while helping keep our country safe and strong.  I gave a big shout-out to those serving -- and thanked them for all they are doing; at times, I think we don't express enough just how fortunate we are they are out there.  So, to all of you serving, thank you -- and bless you.
I also have several other events ahead that should be a great deal of fun -- and will also help let people know about the book.  This coming Saturday I'll doing a reading that will be in conjunction with a PBS program that will be talking about "The Great Read."  I can't wait for that.  Then, on October 31 I'll be on NPR with host Don Marsh to talk about Plague in Paradise. That is Halloween, a very fitting day to talk about the Black Plague!  Don Marsh is one of my media heroes.  He always asks the best questions, and we have a great time talking about books and "life in general" in today's world.  I know we'll have a great time on the air.
In a couple of weeks I'll also be doing book readings and presentations out in California.  The Black Plague outbreak described in the book took place in Los Angeles in 1924 -- and was the last "major" outbreak in the United States.  So, it is fitting that I do events out there.  I'll be doing a reading/presentation at the Sherman Library & Gardens in Corona Del Mar the evening of October 18; at this event I'll be sharing a wide variety of photos that were taken during the outbreak.  Then, on the afternoon of October 20, I'll be doing a reading at the Barnes & Noble store in Burbank.  If you are in the area for either of these events, please stop by and say hello.  I have plenty of other events scheduled as well, and I'm looking forward to all of them.  I love getting out to visit with readers and talking about my books.
For the readings/events related to this book, I decided to bring along quite a few "visuals" to show what happened during the plague outbreak.  I've been taking with me to the events such items as one of the rat traps used to catch rats during the 1924 outbreak, photos of the major places involved in the story, and even bottles of the "treatments" used at the time, which were very primitive by modern standards.  I believe people in the audience have really enjoyed seeing these items and hearing how they were used. I've even been bringing a pack of large, rubber rats to place around the rooms while I read!  Some have thought this pretty great -- others have said the rats are creepy!
I also just found out the e-book version is now available through Amazon and other venues, so for those of you who prefer to read on your electronic devices, you can now order the book.
I better sign off now.  I have a reading this Saturday in Waterloo, Iowa, at the Barnes & Noble store there -- and I have a few items to get ready before that event.  Again, if you are in the area, please stop by!
Happy reading, everyone!
JSC
Posted by You wont believe this, but... at 7:17 AM No comments: