Plague in Paradise off to print!


I'm very happy to announce Plague in Paradise: The Black Death in Los Angeles, 1924 will go to print June 8.  This is one of the steps in the process of book publishing that is a true joy for the author because it represents the culmination of all the work that went into the project.
Interestingly enough to me, the last piece of the puzzle for this book was the book cover, which is usually done much earlier in the process.  There were almost a dozen versions prepared before the final was chosen.  One of the early versions had a HUGE rat poised above the picture of downtown Los Angeles. Rats harbored the fleas that caused the plague, so having a rat on the cover seemed to make sense at first. However, when this draft of the cover was shown to groups, to get a marketing perspective, the rat wasn't popular at all.  Many said it was too scary or spooky, which turned them off.  Others said it reminded them of the 1950's sci-fi films with giant insects attacking people (like the giant ants in the movie "Them!").  So, out went the rat.  Other versions followed until those involved with the design came up with a cover that was "pleasing to the eye -- and interest-catching."
Having a good cover is a dramatically important part of publishing in today's world. For those who are browsing in brick-and-mortar bookstores, an eye-catching cover can make all the difference between a person walking by or pulling the book from the shelf to take a closer look, which might lead to a purchase.  For those looking through the listing at online bookseller sites, it has been estimated that the cover of a book is one of the most important determinants of all in selection of a book for purchase.  One study suggested as many as 75% of all books purchased online were chosen because the cover of the book drew the purchaser to it.  Therefore, it is no wonder publishers take so much time making sure the cover is exactly right.
I'm attaching a copy of the final version of the cover of Plague in Paradise. I also feel a little explanation may be in order to go along with it. As mentioned in a previous post, the book is a literary nonfiction account of the last major outbreak of the Black Plague in the United States, which happened in 1924 in Los Angeles. At the time of the outbreak, Los Angeles was known as the "Paradise of the West."  City officials touted it healthful climate, its booming business community, its new harbor, and as a place where families could come, plant roots, and grow and prosper along with the city. Hence -- the "Paradise" part of the title.  And then the plague showed up.......
So, the main image on the cover is done from an actual picture of downtown L.A. in 1924 -- to help illustrate how much the city was growing and prospering.  Then, in sharp contrast, at the bottom of the cover, just below the image of the city, an image of a cemetery appears to represent the devastation caused by the appearance of the Black Death in the community.  I especially like the Art Department's choice of yellow, red, and black as the dominant colors in the background; for me, these add to the stark contrast between the fast growth of the city and the sudden outbreak of the plague.  I tip my cap to those who worked in the cover.  I believe it will draw potential readers to the book, whether they are looking at it in a store or online.
As mentioned, the book goes to print June 8.  There are several other steps after a book is printed before it actually shows up on shelves at all the places where books are purchased. The book will be available shortly for advance purchase for those who want to reserve a copy, and it will show up in bookstores in about two months.  I'll provide more details about that as we get closer to the actual release of the book.  I think readers will find this story quite interesting and revealing, especially as pockets of of the Black Plague have popped up in several countries in the past few months.  The "Scourge of the Middle Ages" is still very much with us today.
I hope all of you enjoy the start of your summer.  Happy reading, everyone!
JSC 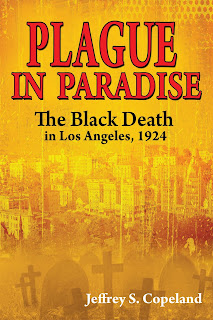