October 30, 2018
Hi, All!
Here are just a few pictures from my recent book tour in California.  The first two are from my reading at the Sherman Library & Gardens in Corona Del Mar.  The picture of me 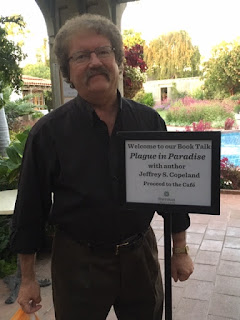 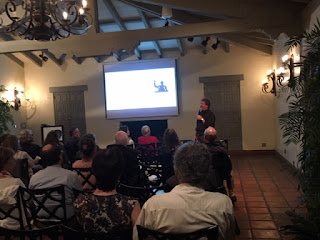 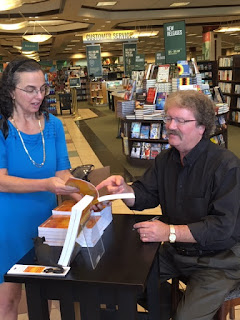 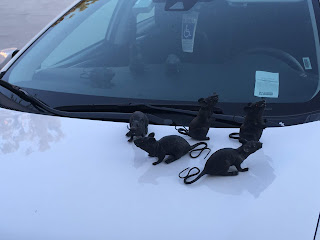 with the woman in the blue dress was taken at the Barnes & Noble store in Burbank. You'll also notice rats all over my rental car in yet another picture.  Look closely and you'll see they are also on the dashboard inside the car!  I have been taking rubber rats that squeak when squeezed to my book events -- and have been giving them to those who participate in the Q&A sessions after the readings. The plague was spread by way of fleas on rats, so I thought this would be an appropriate "visual" for the talks.  People are loving them!  I took a whole suitcase of these rats with me on the book tour, and the people who x-ray the baggage at airports were freaked out when they saw the rats, especially because there was an outbreak of Typhus (also transmitted by fleas on rats) while I was there.  Everyone had to make sure my rats weren't real!  I'll be posting more pictures soon, so stay tuned.
Happy reading!
JSC
Posted by You wont believe this, but... at 5:38 AM No comments:

October 29, 2018
Hi, All!
I just got back from the California book tour.  I had a GREAT time -- met some pretty wonderful people, had nice crowds for the book events, sold lots of books, and saw some new sites out there as well.  I even went on a Hollywood tour one afternoon!
I did book readings/events everywhere from Corona Del Mar up to the Burbank Barnes & Noble store.  The timing of the trip was very interesting as Los Angeles, where the events of the book took place, was currently in the middle of a horrible Typhus "epidemic" (the exact word used initially by NBC News!).  What I discovered was yet another case of "The more things change, the more they stay the same."  Why?  Well, at one of the book readings, I had a huge crowd.  In the middle of my reading I asked how many in the room had heard of the Typhus outbreak taking place, and only *four* individuals raised hands.  One of the four said, "I don't think much about it because it is taking place in the homeless around Los Angeles."  This person was shocked when I revealed I had just seen on NBC news that "ground zero" for the epidemic was in the million dollar homes just north of the city.  This is merely speculation on my part, but my best guess would be that the pets of those who live in those million dollar homes somehow got the fleas that help transmit Typhus -- and then it spread from there.  Still, listening to that individual reminded me so much of what took place in my book.  Back in 1924, many weren't concerned about the illness because it seemed, at first glance, to be focused on the Mexican community and not with mainstream Los Angeles.  It really does seem that as long as there is a group to "pin it on," outbreaks like these don't seem all that important to some people -- and that is so sad.  So sad.
The Typhus outbreak going on right now also sparked added interest in Plague in Paradise because, I think, people were curious about how a similar situation played out in the past. Maybe a reading of my book will help individuals in that area better come to grips with what should be done now.  I sure hope so.
I'm still coming out of jet-lag, so I'll sign off for now.  In the next post I'll try to post some pictures from the trip.  In the meantime, happy reading!
JSC
Posted by You wont believe this, but... at 1:46 PM No comments:

October 1, 2018
Hi, Everyone!
Just for fun, I thought I'd post a few photos from recent book events related to Plague in Paradise.  I've had a great time with this book -- the reception has been great all the places I've visited.  One of the pictures is something I like to do during the "book launch" period for each of my books; I have a bakery near where the event is to take place "screen-print" the cover of the book on a cake!  So, when I do the event, everyone can have a piece of cake while we are visiting about the book -- and they can all eat a piece of the cover of the book.  I know -- it's silly -- but fun!
The one of me at a traditional "signing table" at a Barnes & Noble store shows the types of "artifacts" I'm taking with me to events for this book: rat traps, rubber rats, photos of yersinia pestis (which causes the plague!) and pictures of locations in Los Angeles where the outbreak took place.  The items do make the signing table look more than a tad creepy, but this fits the subject matter of the book -- and people really do seem to like the rats!  The only problem with this picture is my eyes are closed, so it looks like I've fallen asleep while "meeting and greeting" people at the store -- yikes! Every once in a while, if a person seems really excited to read the book, I'll give one of the rats to her/him when they purchase a book. When the rats are squeezed, they sound like real rats!
I'll post more pictures as I do more events.  In the meantime, happy reading!
JSC 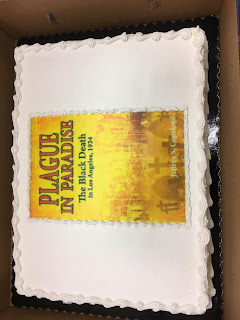 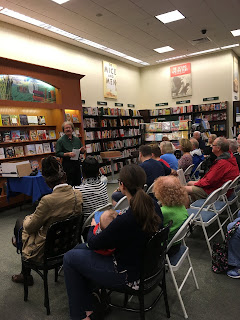 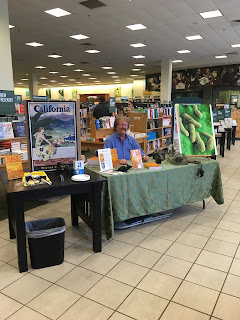 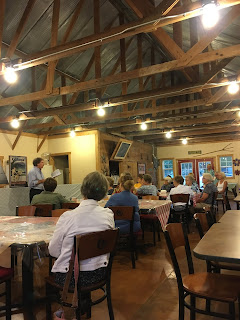