June 28, 2017
Hi, All!
One of the best and most satisfying moments for an author comes when the boxed-up manuscript is finally sent off to the publisher.  I got to do that late yesterday, and I feel so lucky and blessed to have completed another book.  This one is titled Plague in Paradise: The Black Death Comes to Los Angeles, 1924.  Literary nonfiction is my area, so this is the true story of the last major outbreak of the Black Plague in the United States, which took place in Los Angeles in 1924.  It is a story that is part mystery, part suspense -- and is also highly emotionally-charged at times -- because of how this outbreak was handled by doctors and officials in Los Angeles 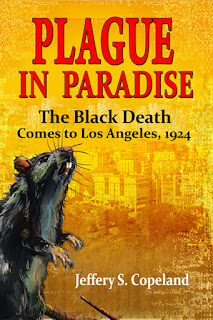 .  In the book, we see the best in human beings -- and the worst.  In the end, it is a story of the triumph of the human spirit in times of terrible tragedy.
This was a very challenging book to write.  In order to accurately present the medical side of the story, I had to pour over what seemed like countless medical books and journals.  At the same time, I had to research what life was like in 1924 Los Angeles; to do that, I read hundreds of newspapers of the era to get a good feel for everything from what music was like then to what transportation was like to what people wore and how they spoke.  While doing the background research, I was shocked by the prices of goods and services in 1924 -- some much cheaper than today, of course, but others much more expensive because of "supply and demand" issues.  I also had to travel all across the country to acquire just the right pictures for the "Photo Section" that will be at the back of the book. One of the highlights of my travel to gather information came when I was able to have lunch with Father Arturo Corral Návarez at Our Lady Queen of Angels ("La Placita"), the church that was the hub of the neighborhood involved in the story back in 1924. From Father Arturo, I learned so much about the history of Los Angeles and its residents.
I'm going to attach to this note the current draft of what the front cover of the book might look like.  I really, REALLY like this -- because it shows the skyline of Los Angeles in 1924 (the "Paradise") and a rat (the Black Death).  I also like the lettering, which helps create an eerie tone.  I'm sure this cover will be changed some before a final version is put together, but I wanted all of you to see this one now.
I get questions all the time about the steps a manuscript goes through before it ends up in final form -- and a book actually shows up on the shelves of a bookstore or is made available for e-readers.  I'm going to be posting in the future as the manuscript goes through all the steps so that this part of the publishing process can be seen.  I hope you enjoy this "step-by-step" account.
Summer is in full bloom now, so I wish all of you a wonderful time, good health, and happy reading!
JSC
Posted by You wont believe this, but... at 6:58 AM No comments: